You Can't Win 'Em All

We put in an offer on the house we loved after I dragged Darling Husband to see it.

We didn't get it.

But it's okay! Really!

Actually, yeah, it's okay, because on our last showing, we realized that part of the upstairs was a bit...off.

And by "off", I mean that the cantilevered hallway joining the upstairs bedrooms was sagging. Because it might not have been built properly.

The potentially catastrophic cantilever is the reason we made them an offer - ahem - $39,000 below their asking price. That cantilever fix could have been a $16,000 issue.

We honestly didn't think the owners would go for it, and they didn't. We found out 1/26, and I've already bounced back from the quasi-disappointment.

So I guess getting all those tile samples was a bit premature. I'm still keeping my Design Boards, though. Would you like to see them?

How silly of me! Of course you want to see them! Your life revolves around my blog, right? RIGHT? 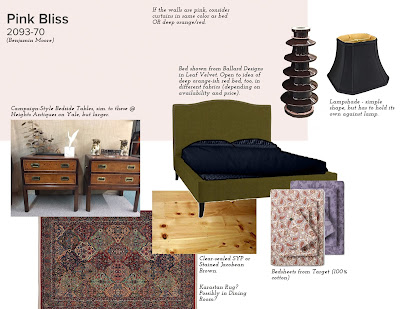 And before you ask: YES, Darling Husband gave me permission to paint the walls pink! When I first asked if he'd be okay with it, well, his expression spoke for itself.

But then I showed him the lovely design above, and he saw that the pink walls would be in contrast to the more masculine feel of the bed (deep olive velvet & navy coverlet, but note the "feminine" sheets), and the imaginary bedside tables that are bigger than the ones in the picture, but have the same "campaign"/"captain" look to them. And the lamp bases (I have two) are antique ceramic insulators from a power transfer station.

Because I'm an amazing shopper. And Darling Husband - who knew I'd been stalking them at the antique store, which was having a sale - was kind enough to agree that I should get them. It helped that the lamps were on sale.

Purchases are more fun when they're on sale, no?

The only downsides to my ceramic insulators are that: 1) I have to pay someone to make them into lamps; 2) they have old power transfer station grease inside them that I have to clean out.

So cleaning is the plan for Saturday afternoon/evening, depending on how exhausted I am after lunching with a friend and then flitting to open houses.

Like a greasy social butterfly.
Posted by Strained Consciousness at 7:10 PM No comments:

The Times, They Are A Changin'

A brief recap since August of last year, when I last wrote:

1. Still married! Darling Husband and I adopted a female dog, née Sara, who we renamed Ginger. She and Fred are inseparable. When she wants to play but Fred is ignoring her, she sits on his head until he gets so annoyed he stands up, and then she goes in for the kill. She's a mischievous little thing.

2. I started a website - Curated Houston - and just as quickly shut it down when I realized the workload required wasn't congruent with the migraines I have. In theory, it would have featured profiles of Houston (and surrounding) interiors shops, educational articles ('What to Look For When Buying A Farm Table', for instance. Real hard-hitting gritty realism stuff), and musings/adventures in interior design.  Even at one article per week, I was struggling, and I realized I couldn't keep up with it. So I have written a "farewell message" and posted it on the website, but the posts are still available if you want to read them (www.curatedhouston.com).

3. Darling Husband and I are searching for a house, and I believe we've found one. It's farther from downtown, so his commutes will be longer, but he's planning to drive out that way, Tuesday morning, SUPER DUPER early to see just how long the commute will be. If it isn't a Donner Party situation - trapped on Interstate 10, eating his own shoes and car upholstery for sustenance as the days pass - we will most likely put in an offer on the house.

And here's the best part: I dragged him to the house. He didn't want to go AT ALL, but I slipped it onto the list of houses anyways. We both walked in and thought "This feels like a home," and to be honest, even the kitchen - which hasn't been updated since the early 1990s - feels homey and perfect, for now. Eventually, we'll renovate, but for now, it's adorable. I have a lifetime of "I told you so" to deliver, in other words.

4. I might get to go to New York City for the first time in my life. Darling Husband has to attend an awards dinner thingy, and he would be flying back on Friday except I subtly suggested I go with him and we make it a weekend. I AM SO EXCITED. Hopefully no wrenches will find their way into the works to prevent me from going (unless that wrench is us moving into our house, in which case, bring on the wrenches!!!).

5. I've begun "bullet journaling", and it's everything an OCDesigner could want: neatly organized lists and schedules, the opportunity to color and decorate the lists and schedules, etc. It takes a little time, but that time is fairly meditative, so I have no problems with that.

I'm trying to decide what to do to give my days more structure, something like researching and writing a biography, etc. I like to set my sights low, as you well know, Dear Reader. In the meantime, I do house-wifey things (on days I'm able): buy groceries, drop off/pick up dry cleaning, pay bills, take the dogs to vet appointments, do laundry and iron clothes, etc...

That's it, so far. I'm excited by and still obsessive about design in all its forms, possibly more so than before, now that I have the chance to realize my obsessions in physical form. And, oh, Dear Reader! I hope the dream designs turn out to be as wonderful in person as they are in my mind!
Posted by Strained Consciousness at 3:43 PM No comments: