I am beyond excited.

I am going to Dallas for the weekend.

Not only will I get to see my family - both biological and the family we've chosen - but I will get to help my mom celebrate her birthday, albeit a little bit early. And I will get to see Major Tom Shadowmaker, who is taking it easy, these days. I miss the old fellow.

Unfortunately, I will have to work some over the weekend.

I am now entering the first stages of design for my 6-8 week studio project, after managing to pull an A on the Run Lola Run film center I designed in two weeks. My long-term project is a research center in Death Valley (again. My choice, though, this time). I'm thrilled, because I will get to expand on some of the ideas I explored in the previous 2 week project, and get to take them further.

For my last project, I buried the majority of my program underground, with parts of it popping out in the form of concrete cubes. This time, however, I'm going all the way. Yup, my program will be entirely buried with the exception of a few canyons/light wells dug out of the earth for entrances and, duh, light. 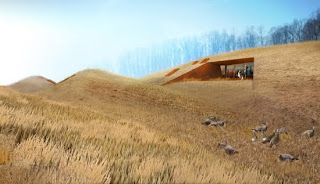 In other words, I am about to design some high-falutin' Hobbit holes. I couldn't be more excited. 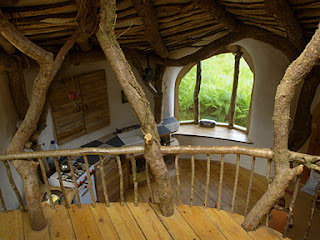 I've always loved "nesting", both in the sense of decorating interior spaces, but also in terms of physically burrowing. My mother used to tease me because I did not sleep beneath my duvet, but wrapped it around myself, like a swaddled baby. I still wrap blankets around myself, although the duvet is now used more conventionally, rather than as a beautifully designed albeit zipper-less sleeping bag.

P.S. The migraines are better. Much better. I've had one in the past week. Everything's coming up roses!
Posted by Strained Consciousness at 2:06 PM No comments:

Two Nights in a Row! Wowzers! 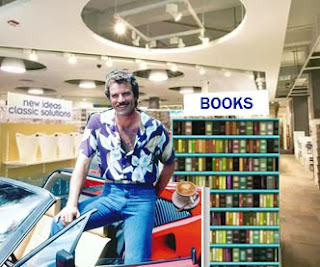 I mysteriously have time to write, tonight, which fills me with dread. I feel like I should be doing something for my design studio - but I'm not.

Oh, sure, I'm researching for the enormously huge research paper (that isn't so enormously huge) that I have to write for my Modern Architectural History class, but that's pretty fun. A lot of fun, actually.

I might just chuck this whole architecture thing and go be a research assistant for someone, because I can seriously sit and read books on anything all day. And take notes, that go on nicely organized note cards with little sticky labels (pre-printed in a nice sans-serif font) in the top left corner that tell me where I got the info, the page number in the top right corner, and filed under the section of the outline to which it belongs in a nifty note card organizer that was $4 at Office Depot.

I get to combine my obsessive love of organizational tools with reading!!!!!

It's like I died and went to heaven! And heaven is a Container Store with a built-in library! And maybe a Starbucks with Tom Selleck as the barrista...

Okay, so maybe I couldn't read books about anything (I'm not too keen on string theory, nuclear reactions, and electrical engineering, so I'd restrict myself to history, the arts, and anthropology...even though the other two kind of fall under the third?).

Right now, however, I am eating up all this Le Corbusier and Soviet Russia.

See, Le Corbusier had "a thing" with Russia in the late 1920s, early 1930s, when the Soviets started to organize themselves and figure out what, exactly, the Communist state should be (an autocracy, apparently). He had one project built there, and entered a couple of other competitions, which he did not win because he was a Swiss bourgeois pig-dog.

But his relationship with the Russian Constructivists he met shaped his future works profoundly. And it's fascinating reading about the impact Communism had on art and architecture, and how architecture was not just seen as something pretty to live in/look at, but as something that could change the nature of society. Architecture was, in and of itself, revolutionary, and I don't just mean "look: that's new" but "we can bring down governments with this building" revolutionary.

The whole idea is mind-boggling to me.

Mind-boggling and fascinating.
Posted by Strained Consciousness at 10:46 PM No comments:

Labels: Books, grad school, love or something like it

All Quiet on the Southeastern Front... and Etymology 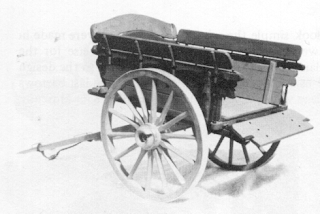 This grad school thing is totally interfering with my literary life.

No, really. I can hardly indulge my creative writing proclivities, these days, be they blog-geared or otherwise.

Heck, even my interior design magazines are on the back-burner, mostly flipped through hastily while I wait for the shower water to heat up, or while I scarf down some Whole Foods rotisserie chicken - because like heck I have time to cook!

So between school work and migraines - because, yes, those are back in full swing - it's been difficult to get to the ole blog for some writing.

Part of what's made my recent life so hectic is the nature of the projects we have in design studio. They've been 2 week charettes - I'll explain what a charette is, in a bit - that have required all the graphical and model-building dexterity of the more usual 6-8 week project, and they've been killers. A pavilion for a site near downtown Houston, a hikers' refuge in Death Valley, and then a film center, built for the director/video artist of my choice (I chose Tom Twyker and Run Lola Run for the film center. The exterior involved lots of red splashes). 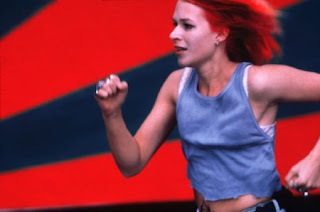 A charette, for those not in the know, is what a short, flurried burst of design activity is called. The term comes from the French word for "cart."

Oh, Dear Reader, but it does, if you know your architectural history.

The term originated with the Ecole des Beaux Arts in France. In those days, the school had projects due all at once: and when it was due, it was due. Every bit of it. The instructors sent a cart through the corridors of the school, and students put their projects on the cart. Occasionally, a student wouldn't be finished, and so they would put their project on the cart, and put themselves on the cart, as well, so they could finish their assignment while it rolled down the hall.

Seriously. How gutsy was that?

So, if you are working feverishly in the last few hours before your project is due in architecture school, you are en charette, or as we now say, "on charette."

You learn something new every day, don't you?
Posted by Strained Consciousness at 7:44 PM No comments: