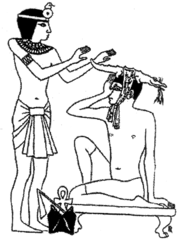 One of the things about being chronically ill is that I have a lot of bad days. There are a lot of days where I'm stuck in bed all day, feeling as if a vise is squeezing my temples, and the pain medicine I take only gives me so-so relief. And don't even get me started on migraine medications... Triptans are useless.

So when a day like today comes around, and I'm headache-free (knock on wood), and my neck is only hurting a little bit, it's an okay day.

Before this all started - AKA 6 years ago - if I woke up bloated and hormonal, with two or three zits sprouting on my forehead, it was disastrous.

Now, if I wake up bloated and hormonal, with a single zit on my forehead (being Paleo means I rarely break out, now), some slight back/neck pain, and sore legs, that's an okay day. It isn't great, but it's okay.

Okay has become, for me, the new great, is what I'm saying.

Okay is when I have the energy to go to the grocery store by myself, to put a roast in the crock pot, to clean out my car, and work on our taxes.

I need to take a moment to just process the fact that I'm filing an income tax return with a husband this year. Ack!

The thing about being "okay", though, is that I still have to pace myself. When I was huffing and puffing by the time I got to the car, my plans to take the groceries home and head out from the house again had to be cancelled. I realized I needed to rest, lest I work myself into a migraine, so my trip to Williams-Sonoma would just have to wait.

So, today was "okay", and I'm fine with that. I'm fine with the burning in my back muscles and neck from leaning over a pile of papers that desperately needed to be filed properly.

I'm fine with the sore legs, and the puffy stomach that's retaining water.

I'm fine with it all.

In fact, I'm more than fine: I'm great.
Posted by Strained Consciousness at 6:06 PM No comments:

Labels: dating (or not), death and taxes, food glorious food, girl you have no faith in medicine, la familia, love or something like it, you gotta pay the piper

My Role in a Jane Austen Novel: Bedridden Lady of Leisure

I'm lying in bed with my dog, Frederic, curled up next to me. In a few minutes, I'll be working on a story I've started - for the tenth time, actually, but I think I really have it, this time - and drinking water.

I'm married, now - Frederic is actually my step-dog, I guess - and my husband is in the living room of our tiny three bedroom house in Houston. I can hear the narrator of Ken Burns' "Civil War" faintly, and last time I peeked into the living room, my beloved husband was working on a needlepoint project: a pillow with "Home Sweet Home" in blocky text at the top, with two palm trees flanking a smiling Predator below.

No, he didn't know how to needlepoint before he met me. He learned about two months ago, first starting with a kit geared towards 5-year-olds that depicted a dog. The dog is named Toby, and will eventually be framed. The Predator is named Theodore, because we have a thing about naming stuff. (Frederic's current favorite toy is a stuffed fabric bone that has a handle for playing tug-o-war. It's named Bonaparte, because it's a bone that comes apart).

The last time I wrote was about a year ago, I think. Maybe a little less. I was still planning a wedding, at that point, preparing for the best day of my life.

That day has come and gone, and I still feel amazingly blessed. Even more so than I did before.

Our first 6 months of marriage haven't been easy. I was suffering chronic migraines - still am, actually - and my doctor at the time had decided I was faking it, seeing as she couldn't figure out what was wrong with me. I guess she thought struggling to live on the 60% pay that came with my short-term disability insurance while paying $500 per month in medical bills was a walk in the park.

I (and my migraines) went back to work, and I averaged 3 days per week, for a while. Then that dwindled to two days per week. I was struggling to make the 30 hours per week I needed to keep my insurance.

I have since found a doctor who believes me, but we aren't any closer to my migraines going away. I was able to take Family and Medical Leave for three months, but when those were up, I ended up resigning my position, with support from my husband.

I have mercury toxicity, which could be contributing to the migraines, and I've since quit eating fish - unless I know where it comes from - and had the mercury-containing fillings in my mouth removed.

Despite all of that, I've had no relief. Occasionally, I'll feel awesome, but if I'm not careful, awesome can turn really quickly into just-kill-me. So I tend not to get out and do much. I'm afraid I'll be thirty minutes from home in my 10-year-old Civic and not be able to get back to our little bungalow.

I'm also seeing a new neurologist, whose office is five minutes away from Chez StrainedConsciousness. She specializes in headaches, unlike my old doctor who treated headaches alongside other neurological illnesses.

So we're still trying to figure out what's wrong with me, and hoping we'll find out sooner, rather than later.

And if that's "sooner", then my old job is still waiting for me. My wonderful boss told me, the day I cleaned out my desk, that the firm wants me back, once I'm healthy again. Even if it's just part-time, at first, I have a place (barring some economic catastrophe that wipes out all of the company's work).

I'm incredibly lucky that my boss is a kind, caring man, who I believe truly cares about his employees. It probably doesn't hurt that he has a daughter my age, either.

While I've been home, I've done a lot of reading - lots of different genres - and a lot of writing. I want to simultaneously write three different stories, but I don't know if I'm capable of that. I'm afraid I'd have difficulty maintaining the individual "voices" each book requires, because one is a young-adult fantasy book, one is an adult fantasy book (but not, you know, bow-chika-bow-wow adult), and one is historical fiction, set in the 1910s-1950s.

I've also considered opening an Etsy shop - don't laugh, now! - to sell embroidery. Not needlepoint, because I doubt people would want to pay $400 for a Christmas stocking, but simpler embroidery that could be framed. I'm still considering it, though my sister's voice is in the back of my head reminding me that I have yet to finish the needlepoint stockings I'm making for my niece and nephew.

So there's simultaneously a lot going on, and nothing going on. Lots of different stressors, but not a lot to do.

So if you have any ideas for what I could do without having to stare at a computer screen, all day, and also ones that I can do while completely horizontal (because sometimes, just sitting up hurts), I'd love to hear them.

Hopefully, they'll give me more to write about than just, you know, whining about my health.
Posted by Strained Consciousness at 8:12 PM No comments:

Labels: anxiety, dating (or not), Dr Useless, girl you have no faith in medicine, la familia, love or something like it, neurologist best friend, Vacation, witch doctor
Newer Posts Older Posts Home
Subscribe to: Posts (Atom)