One of the bonuses/downsides to working in the architectural profession - specifically, as the go-to gal for interior detailing in our office - is the constant exposure to absolutelygorgeousohmygodIwantthat interior design ideas. It is perfectly acceptable for me to look at interior design blogs and architecture websites for a full 30 minutes per day, since those blogs typically help inform my interior details.
That's the bonus to working at my firm.
The downside is that it makes me constantly want to do things to my own personal living space. A few weeks ago, I went crazy at Container Store again and bought Elfa shelving for my coat closet because I was kind of overwhelmed with art projects. Ever since then, I keep seeing these amazing renovations and design ideas on sites like apartmenttherapy.com and remodelista.com and designspongeonline.com, and it's driving me bonkers, because I'm trying really hard to be a fiscally responsible little girl and am attempting to portion out my discretionary spending. 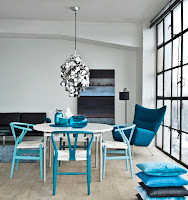 So now I want to re-arrange the furniture in my apartment but 1) I have BIG furniture - and it's heavy- and 2) there's not a whole lot of other ways to arrange my apartment, as things stand. About every other day, I crack open the SketchUp! program and rearrange my furniture and sigh heavily and imagine the possibilities of maybe moving that bookshelf into my bedroom. And then I remember what a royal pain it was getting it set up and in the living room in the first place and I mentally throw up my hands.
Almost makes me wish I didn't have quite so much furniture around the place... but at least I don't have as much as this guy:

Posted by Strained Consciousness at 8:10 PM No comments:

I suspect that, round about the middle of November, give or take a few days, there will be a boom in baby deliveries in Dallas. Why? You're most likely assuming it's because of Valentine's Day, but you're wrong.
The reason for the boom de bebe is the Great Blizzard of 2010.
Wait. This is Texas. We don't have such things as blizzards. And yet, as I write, there is snow on the ground outside - because it's taking forever to melt - and a slew of slushy snowmen. It began snowing Thursday and continued on into the night, knocking out the power at my own little abode for 14 hours.
I didn't have power for 14 hours! As a result, all the food in my refrigerator had to be tossed, so there are some lovely frisbee-shaped discs of frozen-thawed-refrozen soup in my trash can. After I make dinner tonight, I will be taking out the trash. Double-bagged of course.
On the upside, I didn't have to go in to work on Friday, because nobody could/would drive to the office. Only Pacman made his way to the office, and that's because he could simply take the train. Mr. Robinson was snowed in at her house and could even get out of the driveway. Radio and Scooter had to take care of their kids, whose normal daycare accommodations were closed due to the iced over streets. Oldsmobile couldn't get to the office, either - although he dearly wanted to - because his driver couldn't get to him.
What did I do with my day off? After the power came back on, I worked from home, because I thought ahead and brought some redlines home with me. Until the power reasserted its presence, however, I lay in bed in a big sweatshirt under my enormous duvet reading Dwell and The Economist. Not a bad way to spend the day off, albeit a chilly one.
Posted by Strained Consciousness at 7:07 PM No comments: