Get Your Trek On

This happens occasionally - once every two or three weeks - and I'm fine with that. I will sleep exceptionally well, tonight - Friday night - and be ready to "go get 'em" Saturday.

The insomnia - being awake all night - is either a precursor to a developing migraine, or is the direct cause of a migraine. I tend to think it's the latter, due to the other migraine precursors that accompany it: thirst, difficulty concentrating, restlessness, etc.

For a couple of weeks, now, I've been trying to limit my caffeine intake. In some people, caffeine can apparently cause migraines rather than helping end them. Or so my migraine tracking/recording app tells me. So I've cut out caffeine: no iced tea

Oh. I made pecan-flour brownies the other day. I've eaten one per day since Tuesday.

Okay, so after tomorrow, I'll be better about the whole "I'm not ingesting caffeine" trial. I promise.

Yesterday - Thursday, for those of you playing along at home - I began my application for government disability payments. Seeing as I'm unable to work, and my beloved husband is paying for everything, right now, including medical bills and student loans, money is growing ever tighter. At the least, I'd be able to pay down my loans and cover my own medical expenses, if I received Social Security Disability.

I'm conflicted about applying for benefits. On the one hand, my husband has a good salary. On the other hand, feeding both of us costs a lot of money, particularly as I can't just eat a peanut butter and jelly sandwich for lunch every day. So food, medical bills, transportation to and from the doctors, etc., all adds up quickly, not to mention the joys of home ownership, where you "get" to pay someone to come repair your roof and a hole in the ceiling of the laundry room.

Regardless, it will be at least two months before my Disability Application is judged and either approved or denied.

In the meantime, I have a new device with which to experiment that is supposedly helpful for migraines. My dear aunt sent me information about a device called the Cefaly about a month ago, and I have since discussed it with my neurologist, who gave me her blessing to try it (she also gave me a prescription, because you can't just buy it without a doctor sprinkling the transaction with holy signatures and whatnot).

The Cefaly arrived last night, to my surprise - I thought it would arrive Friday - but I haven't tried it, yet. Its inaugural use will take place tonight, during which time I can role play a character of my own imagining from the Star Trek universe, because this is what it looks like: 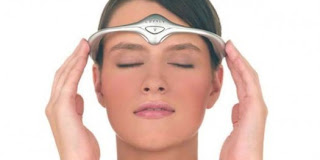 That's just a couple of inches away from making the user look like Geordi La Forge's sister from another mister, right there. Seriously, lower it 2.5 inches, and BAM! Star Trek: The Next Generation, I'm ready for my walk-on role!

Supposedly, the Cefaly stimulates the trigeminal nerve running from your brain into your forehead, which decreases the number and severity of migraines. There's an electrode that's applied to the forehead before the Cefaly device is lowered into place. My electrodes are fancy blue hypoallergenic ones, because I'm a delicate flower, and also, blue is more futuristic and (I imagine) Trekkie approved.

There's a chance the thing might not work, of course, and if that's the case, I can return the device within 60 days for a full refund (except for the electrodes). It's a no-lose situation, the way I see it.

And maybe - just maybe! - this futuristic diadem will allow me to conquer my migraines once and for all.

Keep your fingers crossed, Dear Reader.
Posted by Strained Consciousness at 6:52 AM No comments:

Labels: girl you have no faith in medicine, love or something like it, Money, neurologist best friend, paleo diet, science fiction double feature

Houston has recently been inundated by sever storms, leaving parts of the city flooded. Three days ago, I watched on TV as civilians rescued their fellow Houstonians using their duck-hunting pirogues (flat-bottomed boats, for those not raised in the South).

I also saw the "most cowboy" thing possible for a cowboy to cowboy: roping a calf that was swimming desperately in deep water, pulling the calf into a boat, and hog-tying it so it wouldn't flail and capsize the boat. I tried to find video of the most amazingly cowboy thing ever, but failed. I have failed not only you, Dear Reader, but all the cowboys in the Houston area who spent the last several days roping cattle and horses in an effort to save them. They deserve to be viewed online and admired for their sheer... cowboyness.

Which is now a word.

I'm sure the OED will add it any day, now.

As the city of Houston attempts to dry out (hampered by the thunderstorm raging outside my house as I type), I'm also drying out, in a number of ways.

I'm drying out literally, because I had to take all of 6 steps from the car door to our front door in the pouring rain, after I went out for breakfast.

I'm also drying out metaphorically, because I've stopped taking the narcotic pain killers that have kept me going for the past few years.

About a year ago, I began thinking about it. I have a wonderful sister who is unable to take opiates (which we discovered after an emergency appendectomy back in 2008). They make her incredibly nauseated and ill. See as we have a lot of the same intolerances to foods, I began to wonder if, perhaps, we shared an intolerance to opiate pain medications.

"But, Ms. StrainedConsciousness," you say, "if you began considering this a year ago, why are you just now quitting the medicine?"

That's a good question, Dear Reader, and the answer is: fear.

I've been taking them because I feared pain, and was scared that quitting the pills would lead to an automatic resurgence in pain.

After a full year battling migraines, sciatica, and neuropathy stemming from the chemotherapy I had as a teenager, I decided to suck it up, and I found myself discussing the idea of quitting pain pills with my Pain Management doctor a week ago. 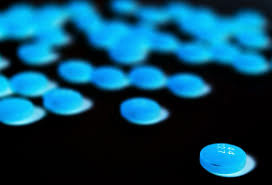 As a result of our discussion, she wrote me a prescription for 10 pills (as opposed to the usual scrip for 84), and told me how to wean myself off of them.

For the past week, I've decreased the amount taken: 1 pill per day for 3 days, then a half pill for 4 days, and finally, Tuesday night, no pills at all that day.

Before quitting the narcotics, I was typically taking a full pill every night before bed, and then sleeping for 9-11 hours. I'd wake up groggy, and usually fall back asleep for a couple of hours after 30-45 minutes of perusing the internet.

For the past two days, after not taking any pain medication the night before, I've awakened after 7-8 hours of sleep feeling refreshed and awake.

I feel more lucid during the day, and I fall asleep more easily at night.

I'm still using muscle relaxants to help with spasms in my neck, shoulders, and piriformis, but mostly extended-release ones that don't make me groggy. Before I go to sleep at night - and if I have a migraine during the day - I'll take 1-2 of the "acute" muscle relaxants my doctor still prescribes (these render me unable to drive, as I'm considered impaired, so I try not to take them during the day, if I can help it).

The weather this past week has been a real challenge to my migraines, since rainy weather and high humidity tend to set them off. Despite the pain (and the fact that there isn't an acute migraine medication out there that works for me), I've managed to survive without taking pain meds during the day.

There's the possibility that the withdrawal symptoms can continue to rear their ugly heads for the next two months, but I'm being vigilant, and also listening when my body says, "You know what? I know you really want to go for a walk with your husband and dog, but you can't. You're dizzy and your blood pressure just dropped. Go home, while you still can."

So for now, I'm waiting for my body and the weather to stop freaking out.

Hopefully sooner, rather than later.
Posted by Strained Consciousness at 11:38 AM No comments:

Labels: anxiety, Dr Pain, girl you have no faith in medicine, helpful hints, poppies will put you to sleep, this is why we need healthcare reform

I went to the WWE's 2016 Wrestlemania in Arlington, TX at the AT&T Cowboys Stadium.

It was pure insanity.

You might be thinking how I survived it, what with my migraines and all. I wondered how I'd survive it, before I went in. I imagine I lasted as long as I did because I was completely hopped up on adrenaline, the way I imagine soldiers are going into war. Also, I had pain medicine with me, so that had some bearing on the fact I'm not dead.

Since that occasion, my husband - without whom I wouldn't be interested in Wrestlemania in any way, shape, or form - have discussed why it is we weren't immediately agoraphobic upon entering the stadium, given that we dislike places like amusement parks (shudder) and rodeo fairgrounds. I finally settled on this answer, though I'm not sure if I should share it with the public:

The fans at Wrestlemania were "our people."

They're the same otherwise mature, responsible adults, who watch Monday Night RAW. They have decent-paying jobs (otherwise they can't afford the tickets) and enough to pay to travel to Arlington, Texas for a weekend, and most likely miss work on Monday.

I admit, I was nervous going into the whole thing. I considered claiming a migraine and not going. But I felt pretty good the day of the event, so I sucked it up and went. With a couple of pain pills in my pocket just in case all of the pyrotechnics took their toll. Which they eventually did.

Among the amazing, unexpected things I saw at Wrestlemania were: 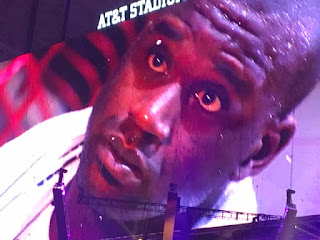 Joan Lunden appearing, because she was inducted into the WWE Hall of Fame. Because of COURSE she was... 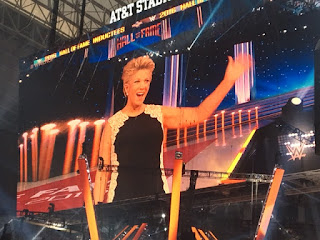 The Rock (aka Dwayne Johnson) came out to interfere in a brouhaha, ripped off his pants and shirt (no complaints here!), and wrestled a bit. 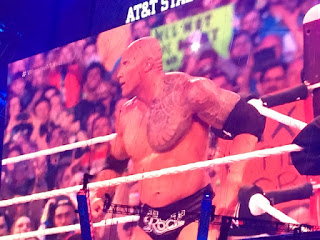 Three guys jumped out of an enormous cereal box while wearing unicorn horns on their heads. 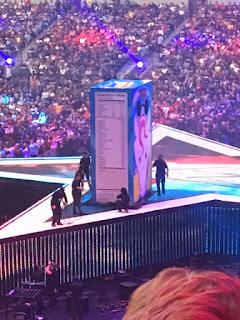 Stephanie McMahon (Chief Brand Officer for WWE, daughter of WWE founder Vince McMahon, wife of Triple-H (HHH), who is the COO of WWE) appeared in what I like to imagine is her typical office attire. It involves a mask and a leotard... 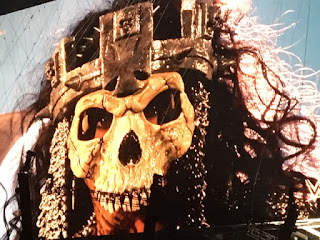 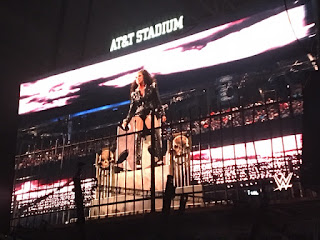 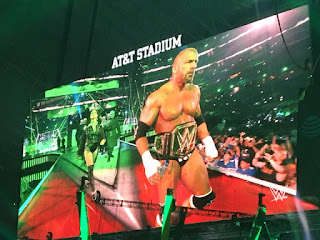 
The usual sort of thing you expect to see. Especially from multimillionaire business executives.

Around 9:30 pm, the large quantity of aforementioned pyrotechnics took their toll. I downed some medicine, along with a bit of cotton candy and some water.

Overall, it was more fun that I'd expected. I'd been anxious about wandering a stadium where grown men are dressed as deceased pro wrestlers, but it was amazingly entertaining. I walked behind one fellow dressed in full Macho Man regalia, and every fifth person shouted "Oh, yeah!", which earned an identical response from the costumed carouser.

I'll say one thing for Wrestlemania: it's a spectacle.
Posted by Strained Consciousness at 10:57 PM No comments: